Hike in The Peak District: Edale to Jacobs Ladder

Hello everyone, and welcome back!  This time I've just popped in to share with you some photos of our latest adventure, a hike in the Peak District from Edale up Grindsbrook to the  Kinder Plateau and down Jacobs Ladder.  Well, that was the intention anyway! 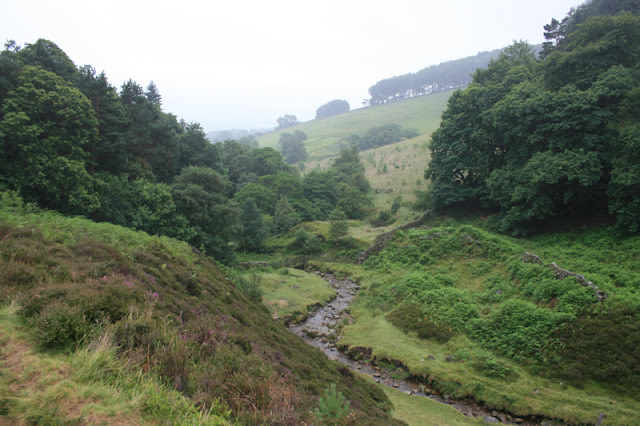 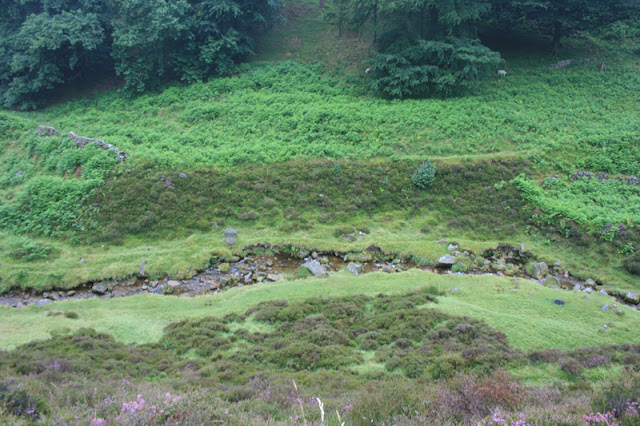 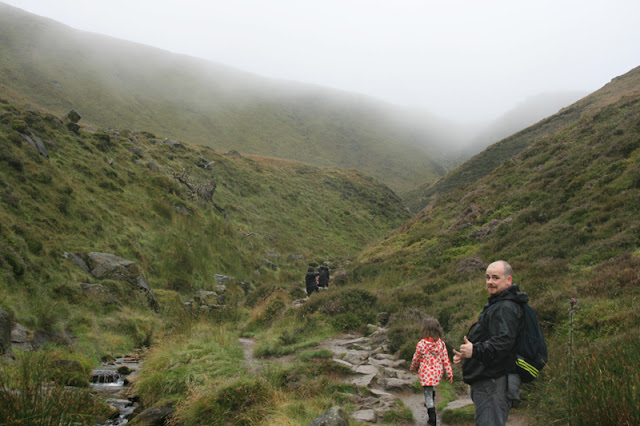 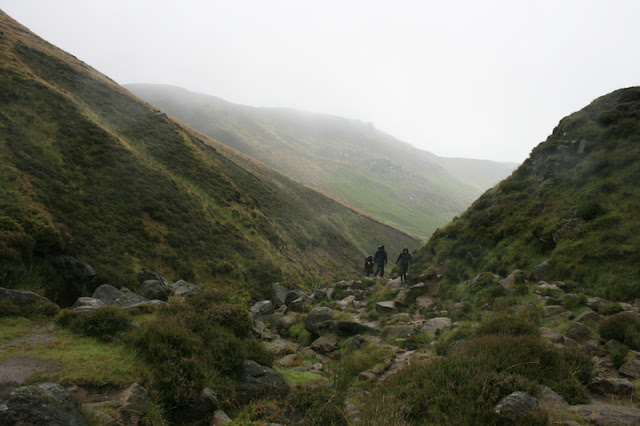 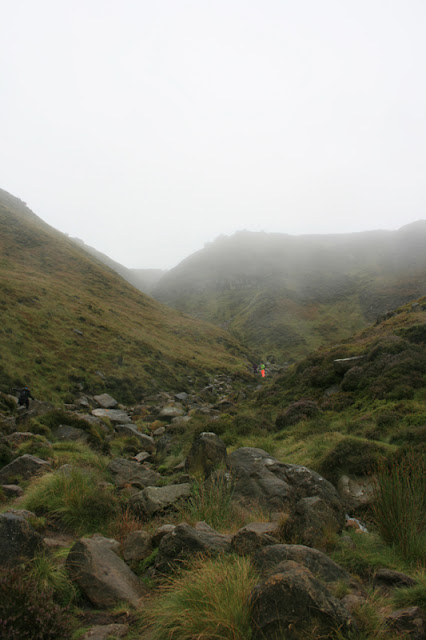 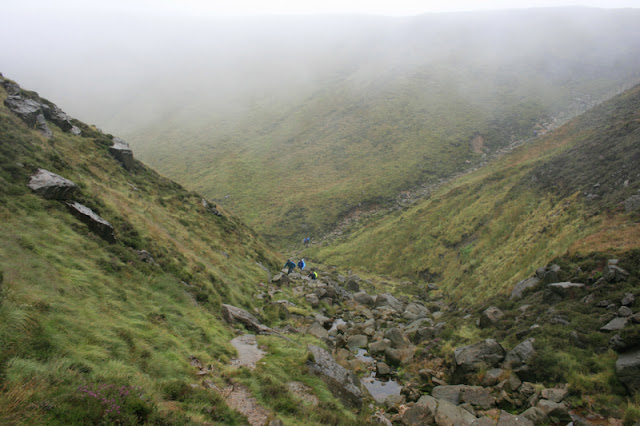 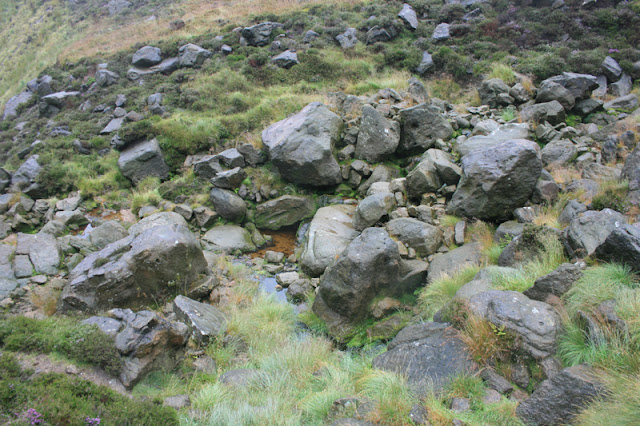 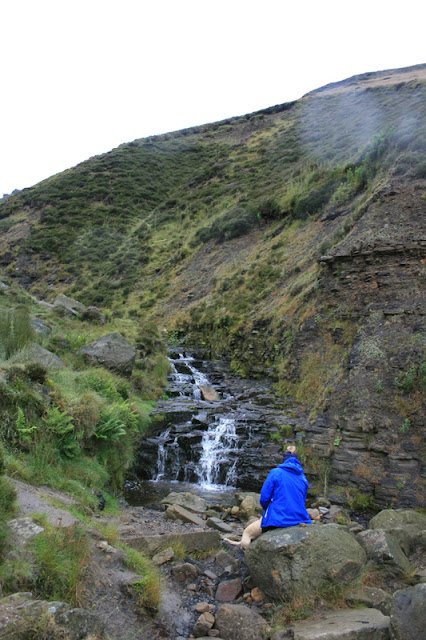 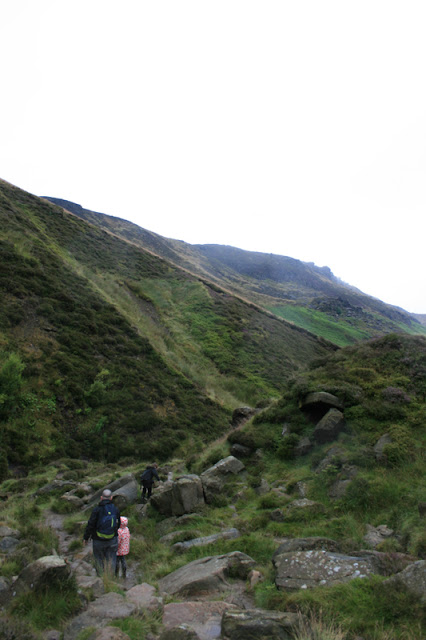 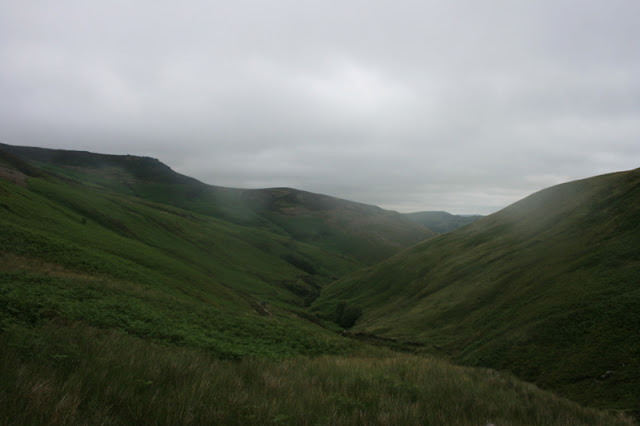 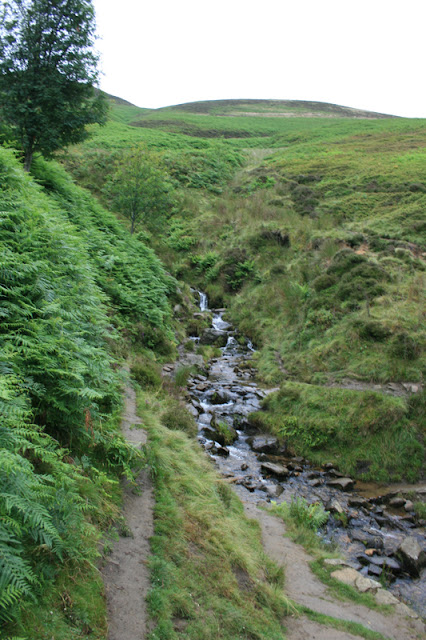 We headed up Grindsbrook, trotting along mud paths, scrambling over boulders and negotiating the stream at various points.  Unfortunately the weather wasn't in our favour, rather than rain proper there was a very fine drizzly mist that meant that by the time we were on the climb up to the Kinder Plateau we were soaked through even under waterproofs.  We took a break for lunch to refuel but the ordeal had proved a bit too much for my partner's youngest, who was rather too young for a trek as challenging as this and who was too tired to continue.  Furthermore we discovered from a kindly and experienced walking guide who passed by us that we had accidentally taken the more difficult route, and would soon have to negotiate a waterfall to continue or descend back the way we'd come for some distance to then climb up the easier way.  Since progress with the little one was so slow it seemed unlikely that we'd complete the walk in a reasonable time frame, so we decided instead to retreat to the Penny Pot Cafe in Edale for hot chocolates and coffee.  Even though we didn't complete our goal this time it was refreshing to be out on the Peaks again and I enjoyed snapping away with my camera capturing all the wonderful colours and textures.  Another big plus is that walkers are some the nicest, most polite people you can meet!  This will probably be our last trip up the Peaks this summer but hopefully we will return next year.

If you're interested in this walk you can find the route and map on the Ordnance Survey website, hopefully you'll have more luck completing it than we did!  Happy hiking!

Thanks as always for reading and see you next time, best wishes,

Hello lovely readers, and welcome back!  Well it's looking like summer has been and gone again, I wonder if we'll get any more warm, sunny days before the year is out?  In June I and the fella went on a trip to Uppsala in Sweden; we'd packed plenty of warm clothes since Scandinavian countries have a reputation for being cold but as it turned out it was much warmer than expected.  Here's some photos and details of our stay in the land of meatballs and Ikea (we did see an Ikea from a train window, but no sign of meatballs during our stay).

On the first day of our visit we swung by Uppsala Cathedral (Domkyrka), where scientist Carl Von Linne and Gustav Vasa (Gustav I of Sweden) are buried.  The interior was very richly decorated with lots of gilt, sculpture and painted patterns.


We then made our way to the Botanic Gardens, which house over 10,000 species of plants and which as an orangery and tropical greenhouse.  It was gorgeous to take a stroll through, sit on a park bench overlooking a lake and let the world go by.  I also had fun spotting the local plant and bird life.

On the second day of our trip we caught a bus a short while north of the city and found ourselves in Gamla Uppsala (Old Uppsala), the site of several burial mounds and boat graves.  They had an impressive museum on the site which showed some of the best finds and gave a background in local history and Norse mythology.  The remains in the burial mounds had been cremated so there was frustratingly little that could be determined as to who was buried there, though there are several theories (including that they were ancient kings, or the graves of important noblewomen).

We then headed to Odinsborg for refreshment, a restaurant famed for its horns of mead.  We also popped in Gamla Uppsala Church.

For our third day's activities we headed to the Linne Museum, dedicated to Swedish scientist Carl Von Linne, who was a famed botanist and developed the sexual system of classification as well as binomial nomenclature i.e. the scientific way of naming species usually using latin names (homo erectus for humans, for example).  The Museum was his home where he lived with his wife and five children,  Adjoining the house was his garden, restored to be similar to what it was like while he was living there.  It even contained his favorite plant which he had named after him : Linnaea borealis.

We then made a pit stop at Cafe Linne where I made sure to try a slice of famous Swedish Princess Torte - which apparently is often served up as a birthday cake!  I had fancied trying ever since I saw it on Great British bake Off.  You can find their recipe for it here.

On day 4 we decided to have a look around Uppsala Castle (Slott), which was built by Gstav Vasa in the 1550s.  It burned down in 1702 but in the years that followed was rebuilt and took on its present form.  It was possible to look around the old ruined parts of the castle where there were still scraps of floor tiles and wall decorations to look at, which formed part of what was once a very ornate castle. 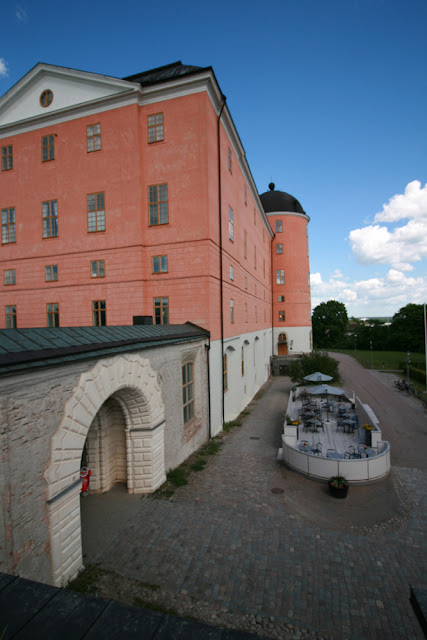 We then had a chilled out stroll through the green spaces of Uppsala, stopping by the urban garden (Stadstradgarden).


In the afternoon we called by Ofvandahl's bakery-cafe (konditori) for a cup of coffee and a pastry.  Apparently it's quite the institution and is endorsed by none other than the king!

We couldn't miss seeing the capital while we were in the country, so on the morning of our fifth day we caught the train over to Stockholm for a flying visit to see the sights.  We walked by loads of impressive buildings as we made our way along the waterfront from Stockholm Central Station to Djurgarden (the capital is made up of a series of interconnected islands).


Situated on Djurgarden is the Vasa Museum, dedicated to a warship called The Vasa: a disaster of engineering that sank barely after leaving port in 1628 and which was raised from the deep in 1961.  The bottom of the ship was built far too narrow, meaning that the ship couldn't roll without tipping over and didn't have enough ballast to make it stable.  A real shame given that the ship was richly carved and painted, it also took several members of its crew to the bottom of the deep with it.

We then made one last stop by a sweetshop so my fella could pick some treats up for his kids.


We then had another day in Uppsala, where we mostly took it easy and went to visit the Museum Gustavianum, which contained an amazing 17th century art cabinet as well as an early autopsy theatre.  Unfortunately it was a little too dark in there to take decent photos without the camera flash on.  We also went to see the Carolina Rediviva, which is the university library usually housing a fine selection of texts and manuscripts (that section was closed on our visit due to restoration works being carried out) and the Upplands Museum which houses collections and displays relating to the history and folk culture of Uppsala.  In general we were very impressed by the quality of the museums on offer, the collections were well displayed and always very informative.

Then finally it was time to catch our last train back to the airport and a flight home!  We had such a lovely time and would love to go back for another holiday, perhaps in the capital this time so we can see some more of the sights there.  We were glad to be in Uppsala though as it was a little off the tourist track and just a lovely, green and peaceful city to wander through.  And as it houses Sweden's oldest university (Uppsala University, founded in 1477) it was a hotbed of learning and education resources.  I don't think I've ever seen a city of the same size so densely packed with museums!

Next time I'll share with you some photos of an (attempted) hike up to Jacob's Ladder in The Peak District.  Things went a little awry, but I'll tell you more about it then!

Thanks for reading, until next time!