Yesterday I received a beautiful little pack of goodies from the lovely Lesley Barnes. Her work makes me feel at once inspired and envious! Great stuff! 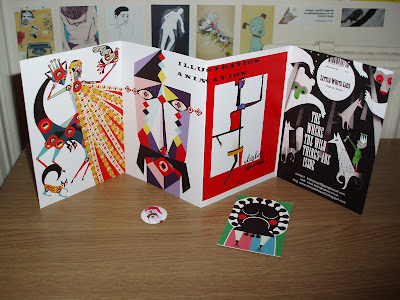 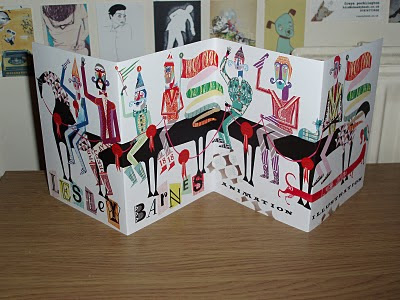 Many thanks also to Miss Pearl Grey, Sandra Dieckmann and Jo Cheung, all of whom were so kind as to write a blog post about the goodies I sent to them. I'm glad they've been so well received! If anyone else writes a post about their giveaway package or my work, do let me know so I can give the shout-out you deserve here :)
Last week I did some playing around on my website, updating and altering. It's the first in a long line of improvements, so keep your eyes peeled!
Posted by Emma Cowley 2 comments:

It's been a good couple of weeks!

It really has! First off there was the excitement surrounding the AOI Images show, and also finding out that my piece had been selected for the national tour. Then, last week I had news that my collaboration with Harry Walsh Foreman for the Half and Half Project had also been selected for their show. Throw in an awesomely generous response to the blog giveaway (thankyoooooooou!) and I am a very happy bunny indeed.
Speaking of which, I never got round to showing everyone what the finished Half and Half picture looks like. To recap, the project was conceived to encourage artists to collaborate with each other, and the collaboration could take any form be it sculpture, installation... or a straightforward picture, as in our case. The pieces were then submitted to the Half and Half team, who selected the most successful to be part of an exhibition, which will be at the The Vineyard Bar in Cork City, Ireland. The private view is on the 15th October, and I'm assuming it will be open for a bit afterward though the dates haven't yet been confirmed. I'll keep you posted once I know. 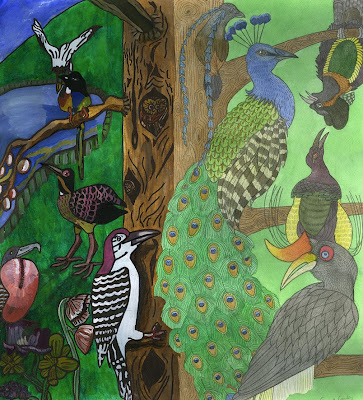 As I mentioned, the response to the blog giveaway far exceeded all my expectations. So many have been enthusiastic and given such kind comments, so a very big THANK YOU to all of you. Everyone's parcels should be arriving around now, and I have had confirmation from a few people that they have turned up okay. The one exception is the parcel for Handmade By Emily, which will be a little late. This is because, despite me having very clearly labelled where the parcel should be sent to and the return address, I opened the door on Friday last week to the postman trying to hand it back to me. I pointed out the mistake and the guy promised to take it back and send it again... clearly someone at the Post Office had not had their Weetabix that morning! But don't worry Emily, it should be turning up very soon anyway... and if not, I'll head down there and give 'em what for!
Hope all of you are having a good time too. Thanks for reading!
Posted by Emma Cowley No comments:

To kick off the week (as a lot of people probably won't read this until the morning) some pictures from the Association of Illustrators Images show private view. It seemed strange to finally be there after such a long wait (I entered the competition around this time last year!) but I was very pleased and honoured to take part.
If you haven't made it along yet, the show is on until the 14th September at the London College of Communication, 10am - 5pm. There's only a couple more days left, so you'll have to hurry if you want to catch it!
I had further good news earlier this week that my work has been selected to go in the Images show national tour, so it will be part of an exhibition that travels the country for a year. The tour dates are as follows:
Beverly Art Gallery, Yorkshire Oct 18th 2010 - Nov 28th 2010
Nottingham Trent University Nov 29th 2010 - Jan 6th 2011
Blackpool and Fylde College Jan 24th 2011 - Mar 6th 2011
TBC Mar 28th 2011 - June 19th 2011
TBC June 27th 2011 - July 31st 2011
Clitheroe Castle Museum Aug 8th 2011 - Oct 9th 2011
The TBC dates will be confirmed later on the AOI site, and you can read more info about the show there too. 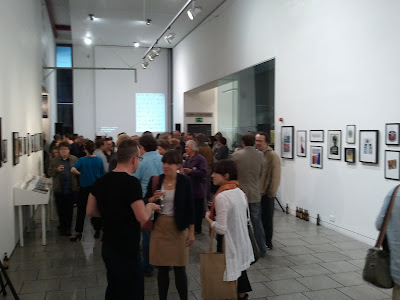 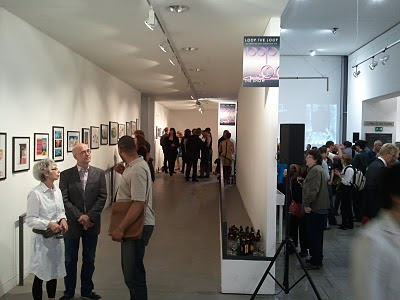 Announcing the results of my massive blog giveaway! Last night I dug out my magical picking hat, and with the help of my lovely assistant drew the names of the three lucky people who would get the top prizes of the giveaway. And the winners are... 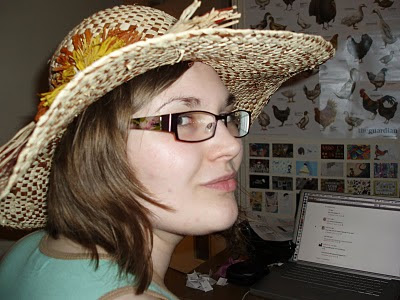 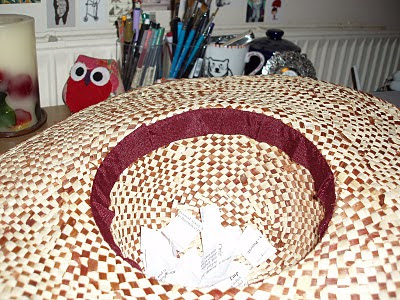 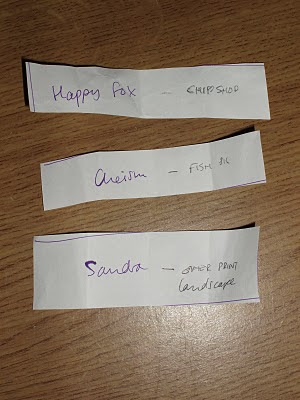 Happyfox, Cheism, and Sandra! Congratulations you three, you have each won one of my lovely A3 prints. And I am also happy to say that there are plenty of goodies to go around, so all of the entrants will receive a parcel of things to enjoy! Happy times :D
There is but one fly in the ointment... two of the entrants had no email address on their blogger profile that I can contact them by! That includes first prize winner Happyfox, and an entrant named only as Joe (so the chances of me googling you and finding the correct person are um... nil!) It would be a real shame if either of you missed out on your prizes so, do get in touch as soon as you can.
In other news...
I have been away on holiday in the gorgeous lake district, and returned home just in time for the AOI Images 34 show, which my work is featured in. Yay! Photos and more information about that coming next time.
Thanks for reading!
Posted by Emma Cowley No comments: