Hello dear readers and welcome to my first post of 2018!  In line with my goal of updating this blog bi-monthly I am here with the latest news and adventures from Casa Cowley.

January largely passed without incident, getting back into gear at work and catching up with friends after the Christmas break.  February has been a little more exciting as I had a week off with my partner Pete, which we spent exploring Leicestershire and its vicinity.


On Monday we collected our hire car and then headed into Market Harborough to explore.  We ducked into a few shops to look round (including locally based fashion label Joules) but spent a lot of the time tucked up in a pub or coffee shop because it was so bitterly cold!  I was pleased to take him into Emerson and Wests' to peruse the cakes and sweet treats on offer, in the end curiosity got the better of us and we shared a local treat called a Market Harborough Cheesecake between the two of us.  It was very nice, spongy and fruity and slightly creamy.


In the evening we were joined by my parents and we tried out a local restaurant called Rocksalt Seafood and Grill, which served us a very pleasant dinner.


Tuesday was a really indulgent treat: a spa day at Best Western Ullesthorpe Court Hotel.  We were greeted by hot chocolate and biscuits upon our arrival, hitting the onsite gym shortly thereafter to mitigate for the calories.  At lunchtime we were served an afternoon tea, and then enjoyed our treatments: Mum enjoyed a thermal body wrap while I and Pete went for a hot stone back massage.  After that we went for a swim and lazed in the jacuzzi, steam room and sauna.


We had an exciting adventure on Wednesday: a trip to Lincoln to see Lincoln Castle and Lincoln Cathedral!  I had been once as a college student to meet and interview Kat and Dave (a.k.a Sue and Steve) of web comic Two Sides Wide but didn't get to see much of the city at that time, so I was really excited to get the chance to explore it properly.  Pete had worked here for a week recently and had told me it would be worth a day trip - we weren't disappointed!


First we visited the castle, which started life as a motte and bailey built by William The Conqueror and was a Roman legionary fortress before then.  It assumed various guises throughout the ages but today the buildings consist of two prison buildings, one a red-brick Georgian wing and another Victorian wing; as well as a medieval castle wall that you can walk around and the Lincoln Crown Court which was built in 1845.  It also has a modern vault containing a genuine copy of the Magna Carta for the public to view.

We then headed on to the cathedral.  Its construction began in 1088, and wasn't complete for very many years as it was subsequently built and rebuilt many times over!  For 238 years it was the tallest building in the world due to its spire, unfortunately it lost the accolade when the spire collapsed in 1549.  We were lucky to walk in just as a guided tour was about to start, so were treated to an insider's scoop of all the quirky carvings and interesting history of the building.

While in Lincoln we ventured down The Steep, a long shopping street leading down a steep slope away from the castle and cathedral.  There were loads of awesome quirky shops and tearooms to explore, but my best find was the local art gallery and artists' co-operative Harding House Gallery!  Highlights included ceramics by Lizzie Brown Ceramics and Tydd Pottery, as well as paintings by Gill Vines which Pete was especially keen on.

We rounded off our visit with dinner before heading home, since we were in the mood for a curry we called in at Castle View Indian Cuisine which was well reviewed on TripAdvisor and with good reason!  It very much slaked our thirst for warming spice and luscious flavour.


On Thursday I got to tick off a to-do that had been on my list for a long time: Bosworth Battlefield Heritage Centre.  I had visited the initial excavation of the car park where the remains of Richard III were discovered (before they even knew for definite it was him) and had since been to visit his final resting place in Leicester Cathedral and the Richard III Visitor Centre in Leicester city centre, but had never been to see the site where he was actually killed after a heated battle against the forces of Henry VII.  It was really moving to see the place in person and hear in detail the story of the battle that day and the events leading up to it.


The exhibition and walk round the field took around 3 hours to complete, after which we headed home to relax in the warm with a rejuvenating pot of tea.

Friday was our last full day with the hire car, so we rounded off the week with a bracing walk at Rutland Water, which I hadn't been to since going on a trip with the Girl Guides when I was young.  We headed to the Hambleton Peninsula where there was a convenient parking area right near to the start of a circular walk around taking in the whole peninsula.  We completed the walk in roughly two and a half hours, and then headed in the direction of home.  However on the way back we stumbled across the famed Hambleton Bakery, and couldn't resist popping in for some treats!  We left with some wonderful breads to try as well as a couple of pastries to sample.

On Saturday morning we had to return the hire car (making sure it was squeaky clean inside and out!), after which we headed up to Leicester city centre to do some shopping and watch Maze Runner: The Death Cure at the cinema.  I had recently bought the new Tom Kerridge recipe book Lose Weight For Good, so we used a recipe from that to make dinner: South Indian fish curry.  It certainly helps that Pete and I are pretty good when it comes to cooking but I have to hand it to Mr. Kerridge - this dish was delicious!  Not the quickest ever to cook but packed with flavour and certainly not what you'd consider 'diet food'.  We always enjoy a chance to cook and will certainly be making this dish again. 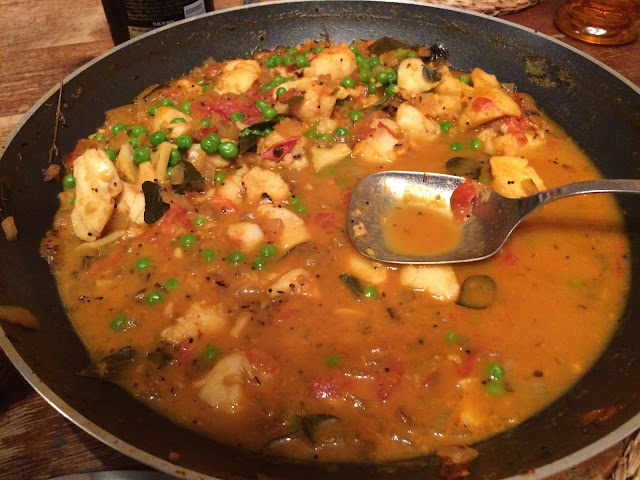 Well that pretty much wraps up the week!  Pete and I packed quite a lot of activities in, we don't get to have much time off together and don't yet own a car between us so we like to make the most of both the time and the transport.  Judging from my diary we don't get another full week together until October!  However you will hear from me before then, they'll just be weekend adventures rather than week-long ones!

All the best and I hope to see you then!