I've spent most of this week avoiding my laptop, and more specifically, avoiding the internet. The trouble with the internet is that everything is only one click away. You only need to click to be transported to another new page of interesting factoids that you can use as a valid excuse for procrastination. Twitter is the worst for providing distraction. Typically I have only just got stuck into what I'm doing and then, with a gentle pinging sound Vice UK tweets it's Do's and Don'ts of the day. Bye bye, rest of the morning. If there is anyone out there who can look at just one, you clearly have more willpower than me, because I can tell you, clicking that link is suicide for any work I intend to get done.
The reason for this isolation was that the entry deadline for the Nobrow flickr competition was only a scant week away, so I could ill afford the distractions of the internet if I wanted to submit my work on time. The brief for the competition was to create two images, one of a person I had never met, and another of a conversation I've never had. Rather than treat each image separately, I decided to have them as a kind of mini-narrative, where the viewer sees a little character (based upon the flower of the aptly named man-orchid, a native British plant that looks a lot like, you guessed it... a wee man) disappearing into the undergrowth, follows them, and finds themselves in a grove surrounded by the more of the beasties. I guess it's a bit like a Victorian fairy painting, except these 'faeries' are anthropomorphized flowers instead of creepy fat kids with wings. 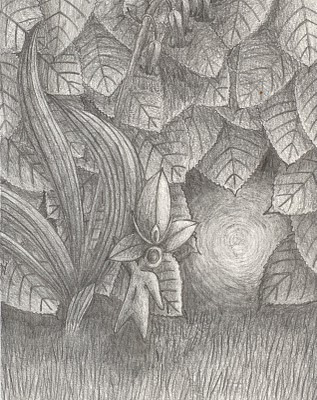 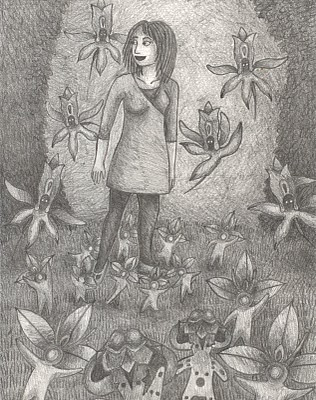 Anyway, it's been entered, so all that's left now is to sit back and see how it does. After looking at the other submissions, I realised that my entry is a quite a lot different to most of the others. For one thing, it's one of perhaps a handful of black and white entries, and depicts an entire scene where most of the other entries are a lot more minimal. I am not sure yet whether this will work in my favour or not. It may be so different as to be refreshing, or it may be too different and not be at all what the people at Nobrow were looking for.
Either way, I am satisfied with the resulting pieces of work. It has been a long time since I have worked in this way, and it may be an avenue that I explore further. I think it would be nice to make work that is a little less 'flat' and minimalistic than my previous stuff, and now seems as good a time as any to really test the limits of what I can do. Let me know what you reckon of this direction, I would really appreciate hearing people's thoughts on the matter.
In other news, the lovely Jen Pringle very kindly sent a really beautiful Valentines wallpaper for my laptop, so many many thanks to her! I promised that I would provide pictures of it in-situ in my retro kitchen (not me having an ironic taste in home appliances, our landlord just hasn't ever redecorated it) but unfortunately I have run out of time for this evening. Another post to look forward to later in the week!
Many thanks for reading, until next time!
Posted by Emma Cowley